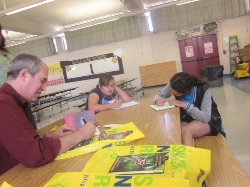 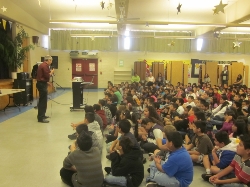 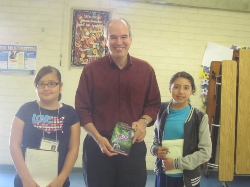 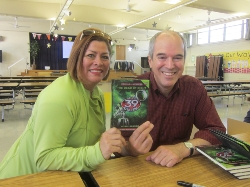 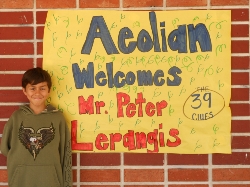 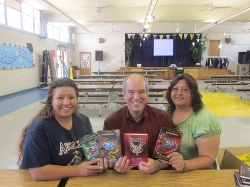 Aeolian students and staff had the proud honor of welcoming The 39 Clues author himself to our school! Read some of our student's reactions!

by Destiny M and Gabby B. 5th grade

On Tuesday April 17th, Aeolian got to meet one of the 39 Clues authors Peter Lerangis.  Third through sixth grade were invited to come.  The assembly was from 9:45a.m. to 10:15 a.m.  The assembly was in the cafeteria.  Mr. Lerangis talked about his career, tips on writing, and let students ask questions on his life and on writing.

Mr. Lerangis told funny jokes, showed a video of where he works, and showed pictures of him in his life.  He also signed and raffled off two different kinds of 39 Clues series.  The two kinds of books were The Lightning Thief and The Dead of Night.  The total number of books raffled off were 32.  Other students bought books.  The books were $14.00 for a hard cover and $13.00 for paperback books.


Here are some students and their opinions on the assembly:

In 3rd grade Kyla W. said, "I read and bought books.  I thought the assembly was funny and interesting."

Fourth grader Javier R. said, " I'm a big fan of the 39 Clues books.  I thought the assembly was interesting and funny."

Sixth grader, Molley M. said, "I thought the assembly was funny.  It was nice to meet the author.  It was cool how the author went to different countries."

On Tuesday, April 17 Peter Lerangis an author came to Aeolian. He told us he lived in New York, he told us what it’s like over at New York, what he does, and showed us where he works. When he was young he use to read a lot, as a teenager he read comic books and tried to write comic books, and as an adult he wrote books. One of his famous books is The 39 Clues, a series. In the book 39 Clues there were other authors that wrote part of the series of 39 Clues. Then he told us what's 39 Clues about. 39 Clues is about these two kids that travel all around the world through time to find 39 clues to reveal their powerful history. My favorite part was when he told us his trip to Russia because he met the president. I learned to work hard and never give up.