Aeolian Comes Together to Help Out Those in Need! 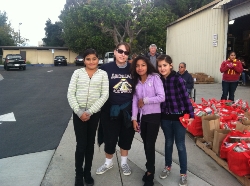 On Saturday, December 17, 2011 Student Council members and their advisors Ana Ramirez and Naomi Garcia handed out toys, food bags, and over $1,500 to deserving Aeolian families in need.
Aeolian’s Student Council, under the direction of advisors Mrs. Ramirez and Mrs. Garcia, created a program called Aeolian’s Angels to help those in need this holiday season. Their charitable efforts for the first trimester came to a close at the annual Los Nietos School District and the South East Los Angeles County (SELAC) Education Foundation’s “Feed the Families” program. Aeolian Student Council members were on hand along with LNSD staff members to hand out bags of donated items including canned groceries, produce, and a whole chicken to over 150 deserving families from the Los Nietos area. In addition to the bags of food, families with children also received toys donated by Mattel and Presbyterian Hospital. For Aeolian’s Student Council this was just the culminating activity for a semester of charitable giving.

Earlier in the trimester, Student Council members created a donation request letter. They hand wrote over sixty letters addressed to all certificated and classified members at Aeolian. The letters detailed how due to hard economic times many families at Aeolian would not have a very joyous holiday season. They implored staff members to give as generously as they could to help out Aeolian’s families. Student Council members then appealed to the student body at a Flag Ceremony and to all parents via our automated telephone messaging system. They told students and parents to give $1.00 each explaining that individually $1.00 might not make a difference but collectively it could make a huge difference.

Student Council Members didn’t stop there. In addition to their donation campaign they voted on using all profits from the Halloween Dance towards this project. Their efforts paid off. Thanks to the generosity of staff, students, parents, and the proceeds from the dance Aeolian Angels were able to raise $1,500.

Los Nietos School Board of Trustees members were on hand on Saturday to witness the dedication and selfless acts of Aeolian’s Student Council and have invited Student Council to a future board meeting to be recognized for their efforts. The staff and administration at Aeolian are very proud of their hard work, efforts, and generous hearts.