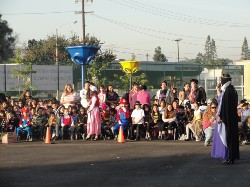 On Monday, October 31, Aeolian Elementary School students, teacher, parents, and staff had a Halloween Parade on the blacktop to show off their costumes and have fun.

At 8:15am, everyone started to gather around the playground, where they sat by class as Halloween music began to play.

Aeolian’s Principal, Mrs. Lee-Ruiz, called up each class by grade level to march in a circle so people could see their costumes. Everyone was very excited to see the different characters, disguises, and outfits.

Mrs. Lee-Ruiz, who was dressed as the Evil Queen from Snow White and the Seven Dwarfs, got into character as she announced each grade and commented on the different costumes. After the students paraded, the teachers and parents took their turn. Students voted for their favorite costumes by clapping and shouting. Then Judges Dawn Haws, the Cafeteria Manager, and Adriana Martinez, Vice-President of the Parent-Teacher-Club, awarded prizes for the three best costumes. Third place was won by Mr. Gonzalez, father of fifth grader Viviana Gonzalez, for his Batman costume. Second place went to Mr. Fulton, a fourth grade teacher, for dressing as Jack the Pumpkin King from A Nightmare Before Christmas. And first place was awarded to the Funky Chicken, played by Mrs. Martinez, a first grade teacher. Other adults were dressed as Girl Scouts, an owl, a spider-rocker chick, skeletons, an Indian, a fairy godmother, a vampire, a mad scientist, and Yo Gabba Gabba.

When the parade ended at 9:30, photos were taken as students returned to their rooms. Some classes even earned parties or other treats!